Rick Warren, megachurch pastor of Saddleback Church in Lake Forest, CA, is currently working to build a "bridge" (through a document called "King's Way") between Christians and Muslims by claiming that the two faiths worship the same God. The "King's Way" document, which is the foundation for these bridge building efforts, is not yet publicly available, but a December 2011 meeting at Saddleback Church has been documented here. According to an article by Jim Hinch of the Orange County Register:

"The Rev. Rick Warren, pastor of Saddleback Church in Lake Forest and one of America's most influential Christian leaders, has embarked on an effort to heal divisions between evangelical Christians and Muslims by partnering with Southern California mosques and proposing a set of theological principles that includes acknowledging that Christians and Muslims worship the same God." (online source) 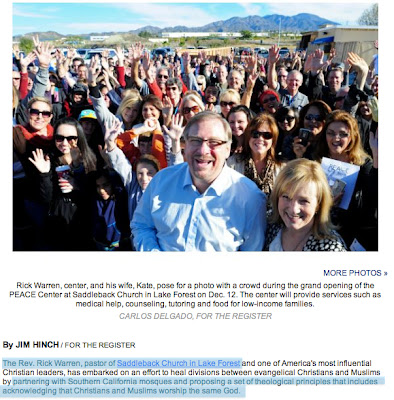 Must I point out the obvious here by stating that Christians and Muslims do not worship the same God?

Sadly, many in today's church will follow the increasingly ecumenical Rick Warren as he goes deeper and deeper into apostasy. This is how this plays out: Right after respected pastor and author John Piper gave Rick Warren his own stamp of approval in 2010 by having Warren be a keynote speaker at Piper's yearly Desiring God conference, I went onto John Piper's Facebook wall to see how people were responding to this unexpected alliance. A few people were concerned, but a great many more were saying something along the lines of, Hey, I always thought there was something a little "off" about Rick Warren, but now that I see John Piper approves of him, I guess he must be okay.

The biblical model, however, is that we are to follow God, and not a man, and we are not to give our allegiance to a teacher just because someone we like and respect has done so.

From the John MacArthur study notes:

1 Corinthians 1:13, Is Christ divided? No human leader, not even an apostle, should be given the loyalty that belongs only to the Lord. Such elevation of leaders leads only to contention, disputes, and a divided church. Christ is not divided and neither is His body, the church. Paul depreciates his worth in comparison to the Lord Jesus.

Christians must not give blind allegiance to their leaders. Indeed, we are all exhorted to examine what is being taught in the name of the God with the actual Word of God:

I've asked this question before, and will now ask it again: how far from orthodoxy does Rick Warren have to fall before Christian leaders will begin to "mark him out" and separate from him (Romans 16:17), rather than continuing to align with him, sell his books, and point their flocks toward him?

NOTE (February 2012): Pastor Rick Warren recently stated in the comments section of the above article that the article contained many inaccuracies, but did not elaborate further. I will be happy to publish any statements from Rick Warren/Saddleback detailing the "multiple errors - factually and theologically" that are contained in the sourced article.