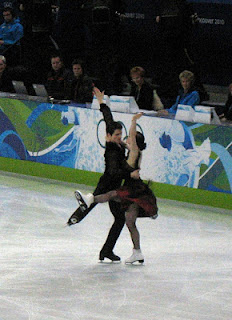 The performance begins slowly, along with the music, but quickly picks up in tempo and action.  The couple skates seamlessly together, their elegant costumes flashing in the lights as they execute their moves with precision. The watching crowd gasps with each jump, each one seemingly higher and more daring than the one before. Finally, the music comes to an abrupt halt, and the skaters - who only moments before had been a blur of movement and flashing sequins - are as still as statues, arms around each other, smiling up at the crowd.  The entire arena bursts into applause, and the exuberant, beaming couple, waving and blowing kisses, skates slowly off the ice to await their score.  There is almost an electric hum in the arena as everyone waits for the score.  Then, there is another gasp - only this time it is an indignant expression of disbelief.  The score is low - too low!  The crowd murmers angrily, with even a few "boos" floating out over the cold still ice.

For those watching on television, the clarity of what has happened comes more quickly.  The announcers, who had just moments before been giving excited commentary on the performance, are now explaining the judges' ruling, along with slow motion camera work to help make the case.  A bobble here, a missed turn there.  Here a sliding misstep, imperceptible to all but the most trained eye, but clear to see with the camera speed reduced to a still picture.

The murmering changes in tone as the crowd settles down and accepts the ruling.  The judges are safe. On to the next....

One question that could be asked here is this: are the judges wrong to make a judgment that seems so obviously contrary to the naked eye? Clearly no, because we understand that they have trained themselves to discern what is not immediately apparent to the untrained observer.

I would submit that today's churches are churning out "untrained observers" when it comes to teaching its members how to study Scripture for the purposes set forth in 2 Timothy 3:16; that is, teaching, rebuking, correcting and training in righteousness.  Because of this, an online ministry that seeks to teach, rebuke, correct and train in biblical righteousness has developed.  This ministry has come to be known as Online Discernment Ministries (ODMs).  But being an ODM isn't necessarily a good thing, at least not according to the neo-cult of Christian liberalism.  You see, in the same way that political liberals use Saul Alinsky's "Rules For Radicals" as a handbook for how to minimize and marginalize their opposition, religious liberals follow these rules as well against those whom they view as their opposition, chiefly, ODMs.  ODMs are often referred to in a disparaging way.  They are often portrayed as judgmental, Pharisaical, mean-spirited, and unloving. And if you should happen to come across an article in which another ministry is sneeringly described as an ODM, let me just warn you that you are more than likely on a very liberal, possibly emergent, website.  How can I say this?  It's because ODMs have come about as a direct response to very liberal, usually emergent, theology.  My purpose in writing about all this to help explain the ongoing battle between ODMs and emergents, and how this conflict came about.

In a nutshell, the church in America has undergone radical - and I do mean radical - changes in the last 20 years.  I'm painting in broad strokes here, but in the 1980s, a group of Christian businessmen got together and determined through poll-taking and observation that the church in America needed to be revitalized.  What they saw were stagnating churches with falling memberships and a huge, untapped demographic of young people known as postmoderns.  Postmoderns are that group of people who came after the modernist movement.  The modernist says, "Science and reason are my authority," while the postmodern rejects this line of reasoning and says "Experience is my authority."  (Still with me?  Hang in there, it will start to make more sense in a minute.)

So these Christian businessmen (Leadership Network) got together to think-tank how to fix this problem.  They decided that what they needed to do was take polls among the unchurched to find out what would entice these people to come to church, and the answers they got across the board were generally this:  people wanted accessible parking, good coffee, rockin' music, short sermons and youth programs where kids could quickly "plug in."

And thus the "seeker sensitive" church was born.  There are many, many examples of this type of church all over America, but a few of the most notable ones are Saddleback (Rick Warren's church), Willow Creek (Bill Hybel's church), and Northpoint (Andy Stanley's church).  What is distinctive about this type of church is that it is typically attended by those who would classify themselves as "modernists" ("Science and reason are my authority.")

But wait - what about all those postmoderns? Didn't they deserve a church of their own?  Ah yes, so they did, reasoned these businessmen, and thus the "emergent" church was crafted out of this same think-tank that birthed the seeker sensitive church.  Think of it as a corporation with a manufacturing plant that makes different flavors of its product: for example, an automobile corporation with one mission statement, one vision, but which creates SUV's, hybrids, trucks, sedans, etc.  Tracking along this same line of thought, the seeker sensitive model was like the SUV of the line (no-nonsense, fun, cheery, practical, straightforward, family oriented) while the emergent church model was more like the hybrid of the line (an interesting new direction from a manufacturing standpoint, a vehicle geared more toward singles and young families, with the cheeky subtext of ecological awareness). The emergent church model - like the hybrid - was geared to the young, urban, hip, eco-greenie postmodern.  And because it was geared toward people who were more experience-driven, the church service itself became an overload of sensory stimulation: candles, icons, couches, a studied vibe of coolness.

So what do ODMs have to do with all this?  Well, ODMs developed because amidst the flurry of product development, the manufacturing line left out one crucial detail: the cars wouldn't drive.

Not to get too remedial here, but....

What is the main function of a car?  A car's primary purpose is to drive; to transport its occupants from one point to another.

What is the main function of a church?  A church's primary purpose is to nourish, train and equip the saints.

These new product lines, both with plenty of R&D, time, money and energy behind them, were complete failures in their functionality: they were attracting massive numbers of people who were faithfully attending but who were completely unable to articulate doctrine after years of attendance. Not only that, but because these products were being marketed and sold as "churches," most of the people who attended were probably under the pretense that they actually were churches....and that they themselves were now Christians.  Surely some of them actually were Christians - because God in his kindness and mercy can and does use imperfect means - but as for the rest? They were a sad, modern day fulfillment of 2 Timothy 3:5: they had a form of godliness but denied the power thereof.  In other words, they used the same language as Christians, went to buildings identified as churches, but could not articulate the gospel when pressed, nor could they discern biblical truth from error.

So in a nutshell (sort of - I had to cover 2 decades, okay?), this was how seeker sensitive churches, emergent churches and online discernment ministries came into being.  ODMs developed mainly to fight the flow of bad theology, bad doctrine and bad teaching flooding into the churches.  When Rick Warren sold people on the idea of "Deeds not creeds!" ODMs saw that as a call to labor in love with people over the novel idea (at least to the poorly discipled) that creeds - and not just one's good deeds - are important, because creeds are what help bring clarity to our view of God and thus conform us more and more to the image of Christ.

When the mantra of "Doctrine divides!" became the standard rebuttal against anyone wanting to hold an idea up to Scripture, the ODMs saw that as a call to help people see that yes, in fact, doctrine does divide, and Jesus himself was the one who told us this and that it is a good thing, not a negative thing (Matthew 10:34-39).

When tolerance began to be prized above truth, with the out-of-context "Judge not, lest ye be judged," repeated ad infinitum, the ODMs saw that as a call to labor over helping people see that while it is true we are not to judge the heart, we are called to judge with right judgment (John 7:24).  By that I mean, we are to be "fruit inspectors," meaning, we don't judge the heart, but we do what Jesus told us to do when he said that "You will know them by their fruits." (Matthew 7:16)  We don't just take a person's Christian confession as straight up evidence that they are, in fact, Christian.  Does this sound intolerant and unloving?  Well, don't take it up with me, take it up with the Apostle Paul.  After all, when the Bereans tested even the preaching of the illustrious Apostle Paul, did Paul say, “Oh those Bereans, such haters! How dare they question me? Judge not!” No, he commended them for their diligence in studying the Word, conveying to us the value of discernment and judging rightly.

When discerning Christians started pointing out false teachers in these seeker sensitive and emergent movements and were scolded for doing this, ODMs saw this as a call for us to remind Christians what Jesus warned his followers about repeatedly: that is, contrary to popular opinion, false teachers will not announce themselves at the door, but will sneak in unnoticed and will have the appearance of being Christian.  This willingness to "name names" and point out false teaching has been dubbed The New Pharisaism by those on the liberal/seeker sensitive/emergent side.  After all, what more effective way to close down your opponent could there be than lobbing this grenade?  What worse thing could a Christian be called, but a Pharisee?   According to today's wisdom, false teaching can be generally and vaguely discussed, but names must never be named.  This is akin to a friend knowing that a chef is putting arsenic in the food he prepares, knows that you are going out to eat in the area in which this chef works, but will not tell you specifically who the chef is, or what restaurant employs him.  He tells you somewhat vaguely that there is a danger, and says "Just eat the good food. After all, you know what good food is, right?"  This is ludicrous....and deadly.  If naming names is good enough for John (who named Diotrephes) and Paul (who named Hymenaeus and Alexander), it's good enough for me.

Coming back to my analogy of the Olympic judges, when we don't see what they see right away, do we call them haters?  No, we recognize that they have a standard for what good technique is, and that they are trained to observe this and judge accordingly.  In the same way, Christians are called to hold to the objective standard of God's Word, and to pass all information through this filter, no matter what its obvious appearance.  May we all be like the Bereans, who were diligent in study and discernment, so that we might present ourselves to God as ones who need not be ashamed and who correctly handle the word of truth (2 Tim 2:15).

photo credit: MikeWu via photo pin cc
Posted by Christine Pack at 12:39 AM