Science Will "Prove" Panentheism (God "In" Everything)? 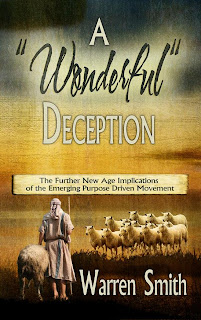 In his book A Wonderful Deception, former New Ager Warren Smith comes to the starting conclusion that the New Age, instead of being a bygone thing of the past, is alive and well, and in the process of merging with a false church inside of evangelicalism (the Emergent Church) in a movement that threatens to destroy orthodox Christianity as we know it. It is a movement that will "deceive wonderfully" (Daniel 8:24).

And that's just for starters. What this is all leading to is an ecumenical, one world religion (as prophesied many places in scripture, most notably in Revelation). This global religion will be panentheistic in nature; that is, the belief that God is "in" everything. This of course stands in distinct contrast to the Christian view, which holds that God is separate from, and transcendent to, His creation. But Smith even makes the case that the scientific community is on the verge of proclaiming that this religious worldview - panentheism - is not only true, but is scientifically verifiable.

As Christians, we know that God "writes" his signature on many aspects of creation, just as a painter might sign his painting, signifying that the work is His. But the (largely atheistic) scientific community, despite overwhelming evidence to the contrary, does not (or will not) "see" any evidence for a sovereign, creator God who stands separate from His creation. Instead, they are on the brink of "proving" a god who is identical to the pagan and occultic worldview of what god is: god as vibration, as energy, as chi, prana or flow (depending on the worldview one holds). This belief is of course preferable to an atheist, who does not want to bend the knee in humble submission to the creator God of the universe. Vibration? Energy? Those are just natural laws - and require no response because they are, in essence, "neutral." But, the sovereign creator God does require a response from His creation: either repent of sin, love him and come to him as he requires (through the blood of Christ) or rebel against him. The Bible states that there are only two choices! Jesus himself said plainly: "He who is not for me is against me." (Luke 11:23)

As a former New Ager, I have also been doing New Age research for a few years, and have noticed a curious trend in the publications I review: there is increasing talk about something described as a "quantum leap," a "planetary evolution." These terms are used for the New Age belief that the world as a whole will begin to move from "individual co-creation" with the world around it to a "planetary co-creation." The thinking goes that the number of people awakening to their "interconnectedness" and "inner divinity" will reach such a critical mass that the entire world, including those not in alignment with this belief system, will be swept along toward the next stage of planetary evolution: world peace. This of course is also in direct contrast to Scripture which states that because of the Fall, we are born wicked and "dead in our sins." We have no inner divinity. But many innocent Christians today, thanks to a generation of "seeker sensitive" churches teaching "doctrine lite," do not even know the truth of Scripture enough to recognize these deceptions when they come into their churches - and thus are buying into this belief system, which is nothing more than a spiritual wolf in sheep's clothing.

Warren Smith also makes the case well that this New Age talk of "one-ness," interconnectedness, and "inner divinity" is also going on in the emergent church movement. The underlying belief in both the New Age and in the emergent church seems to be that only when our world awakens to its "one-ness" and interconnectedness will there be peace. This is a false eschatology and is actually fulfillment of the prophetic statement in Jeremiah 8:11 (" 'Peace, peace,' when there is no peace."). The traditional Christian view has always been that there is no peace and there will never be peace until Christ returns and reigns over his earthly kingdom.

Warren Smith is a meticulous researcher who dots all his i's and crosses all his t's. If you have heard the terms emergent church, contemplative prayer, fractal theory, quantum leap, etc., and wondered what they meant, then this is a must-read. Satan's lies and schemes aren't new....but they are remarkably effective. Arm yourself with truth so that you may stand against the deceptions and lies of our adversary, who is a hungry lion, prowling about seeking whom he may devour.  Warren Smith's book will open your eyes and help you see and understand some of these deceptions flowing into today's church.