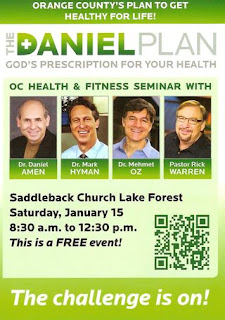 Rick Warren, pastor of Saddleback Church in southern California, has just kicked off a 52-week program called "The Daniel Plan"aimed at teaching Christians how to have healthier lifestyles.

The problem with the program, however, is that Warren has partnered with three men who are well known not only for their medical knowledge (which they are), but are also well known to be proponents of New Age Spirituality.  One of the doctors, the handsome and charming Dr. Mehmet Oz, first became popular through his many appearances on the Oprah Winfrey Show, which led to him having his own health and wellness TV program.

Attached is an article where you may read more about the mind-emptying hypnosis exercise that Dr. Oz plans to perform on Monday, February 7.

You may also listen to Dr. Oz in his own words extol the virtues of the occultic practice of hypnosis.

Rick Warren Wants You To Develop Your "Ultramind"

An Open Letter To John Piper
Posted by Christine Pack at 2:08 PM