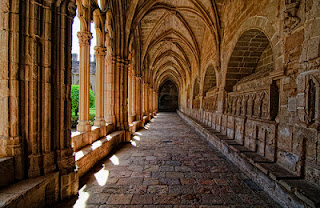 “It appears to me that those who would forbear the study of nature, or shun the observation of its beauties, are conscious of the weakness of their own spirituality. When the hermits and monks shut themselves out from the temptations of life, foolish persons said, “These are strong in grace.” Not so, they were so weak in grace that they were afraid to have their graces tried. They ran away from the battle like the cowards they were, and shut themselves up because they knew their swords were not of the true Jerusalem metal, and they were not men who could resist valiantly. Monasticism was the confession of a weakness which they endeavored to cover with the vain show of humility, and the presence of superior sanctity.

If my graces are strong, I can look upon the outward world, and draw forth its good without feeling its evil, if evil there be; but if my religion is mainly fictitious, then hypocrisy dictates to me the affectation of unusual spirituality, or at any rate I have not grace enough to rise from a contemplation of the works of God to a nearer fellowship with God himself. It cannot be that nature of itself debases me, or diverts me from God; I ought to suspect a deficiency in my self when I find that the Creator’s handiworks have not a good effect upon my soul. Moreover, rest assured brethren, that he who wrote the Bible, the second and clearest revelation of his divine mind, wrote also the first book, the book of nature; and who are we that we should derogate from the worth of the first because we esteem the second.

Milton’s “Paradise Regained” is certainly inferior to his “Paradise Lost,” but the Eternal God has no inferior productions, all his works are master-pieces. There is no quarrel between nature and revelation, fools only think so: to wise men the one illustrates and establishes the other. Walking in the fields at eventide, as Isaac did, I see in the ripening harvest the same God of whom I read in the word that he covenanted that seed-time and harvest should not cease. Surveying the midnight skies, I remember him who, while he calls the stars by their names, also bindeth up the broken in heart. Who will may neglect the volume of creation, or the volume of revelation, I shall delight in them both as long as I live.”

From a sermon by Charles Haddon Spurgeon entitled"Lessons From Nature," delivered August 13, 1871.

This commentary actually flows out of something that a very Godly friend of mine said to me, which was that monasticism is a form of hiding. After all, rubbing shoulders with other sinners on a daily, ongoing basis, is one of the chief ways, I'm convinced, that God uses to sanctify us. And I don't mean only in the church, but in our dealings outside the church as well. God uses personal relationships both in and outside of the church to grow us, sanctify us, and conform us to the image of Christ (Rom 8:29, 1 Cor 15:49), and above all, to reveal his glory. If a person is separated out from the world, and in essence separated from all temptations, how is God glorified in that? It is in our sometimes difficult personal relationships that, by God's grace, we are dying to self (Gal 5:16), crucifying our flesh (Gal 2:20), speaking the truth but in love and not harshly (Eph 4:15), and thinking more of others than ourselves (Phil 2:3) that God is most glorified (Phil 2:15-16).