Who exactly was Thomas Merton? Why is this problematic?  For starters, Merton was a Roman Catholic monk who once compared mystical meditation to the same powerful experience generated by mind-altering drugs.  Merton also rather infamously stated that he saw "no contradiction between Buddhism and Christianity" and said that he intended to become as good a Buddhist as he could. 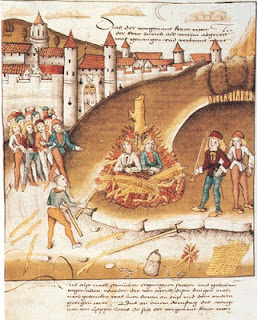 So my question is this: Why are so many of today's Protestant pastors and leaders (like John Ortberg) thinking that they can learn anything of spiritual growth from Roman Catholics? Roman Catholicism is an apostate, works-based religion. And it used to be that Protestants knew this.  After all, what about that little thing called "the Reformation, during which a long and bloody battle was fought to reclaim the biblical doctrine of justification by grace alone, through faith alone, in Christ alone? A doctrine, incidentally, which is denied by the Roman Catholic church?

Monvee, the program co-created by Dallas Willard and John Ortberg, markets itself as a way for Christians to draw closer to God through something called "Spiritual Formation." But Spiritual Formation, for those who don't know, is comprised of centuries old Roman Catholic practices which are the main avenue by which mysticism is coming into today's churches.  Today's Christians who are enamoured by this Christian sounding practice try to make the distinction that there is a difference between "bad" mysticism and "good" mysticism.  Obviously, to those pleading this case, "bad" mysticism would be occultic, and eastern in origin.  But "good" mysticism, so the reasoning goes, would be a type of mysticism that is Christian, biblical, and necessary for spiritual development.

But the "Christian" mysticism taught in Spiritual Formation courses - and recently mass-merchandised by John Ortberg in Monvee - is not Christian, and is in fact identical to classic occultic meditation practices taught in Hinduism, Buddhism, wicca, paganism, etc.  The technique is always the same: corraling one's thoughts through the use of some device (mantra, breathing, etc.), entering into an altered state of consciousness, then "listening" to God.  This is not Christian.  This is what pagans do. And wiccans. And Buddhists. And Hindus.  And just like with crack, a Monvee user will have to come back over and over again, trying to find that elusive high, trying to get another spiritual charge.  Christians "listen" to God through the study of scripture, not through using a mantra meditation to enter into an altered state of consciousness so they can get a little spiritual "bump" from God.

Instead of actually drawing a person closer to God, these occultic practices generate a "counterfeit Holy Spirit experience" which feels very real, very profound, and very spiritual.  Actually, when people engage in these practices, what they're experiencing is real and is spiritual...only, it is not from God.

Let me close by urging anyone reading to beware of Spiritual Formation - and please warn your brothers and sisters in Christ. We "listen" to God not by powering down and getting a spiritual "hit" from God, but by reading and studying the Bible - Sola Scriptura.  And also understand that Spiritual Formation is taught under many different names. Here are some of the most well known:

Interview of a Former Mystic
Posted by Christine Pack at 4:57 PM