Post Tenebras Lux - this was the Latin phrase that became the rallying cry of the Reformation. Its meaning:

"After the Darkness, Light" 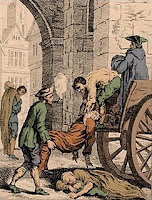 The Middle Ages were a dark period of time, filled with despair and disease. It was a time when an illness could ravage an entire village in a week’s time, and almost a third of all children born would die before reaching the age of five. In this bleak world, there was only one thing the people could look to for comfort: the Church, with its promise of heaven. But the “Church” that the people looked to for hope and consolation was not the true Church, but instead had become a sly counterfeit that required the people to purchase, and work, their way into heaven. This apostate, counterfeit "Church" was the Roman Catholic Church. The Catholic Church, while having an appearance of being Christian, was instead a powerful political and military institution based in Rome that had grown steadily in wealth and power, and now controlled every facet of life.

Jesus Christ had lived and ministered several centuries before, bringing the gospel message of reconciliation with a holy God through repentance and faith in his atoning sacrifice alone. But this message was no longer being taught or preached. Instead, this message had been added to and perverted by the Roman Catholic Church: it was now a complex system of works through which adherents were meant to "earn" their way into heaven through their own efforts.

As Rome grew in power and influence, severe persecution of true Christians by the Roman Catholic Church had forced Christians to go underground. By God’s providence, God’s Word, the Bible, had survived this persecution, but was now kept locked in monasteries, where only the most educated priests had access to its life-giving message. 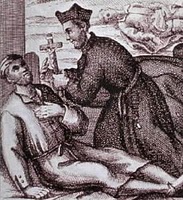 During this period of time, from the 4th century and into the 16th century, the Roman Catholic Church had grown to have a stranglehold over all of Europe. Those courageous enough to refuse to bend to Rome’s authority were cruelly persecuted, often to the point of death. Under the iron fist of Rome, the people were purposefully kept ignorant, enslaved to superstition and tradition. This was when the particularly wicked tradition of “Papal Indulgences” was born, a practice in which monks encouraged people to "buy salvation," both for themselves and for loved ones who had already died. Dying people were also convinced to deed their land and other assets to abbeys and monasteries, in order to “atone” for their earthly sins, and ensure an entrance into heaven. Not coincidentally, it was during this time that the Roman Catholic Church grew wealthy beyond imagining. 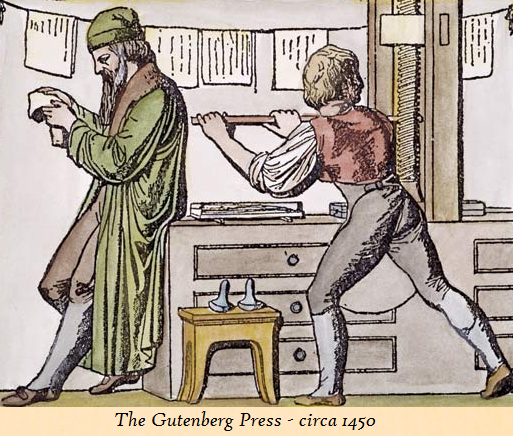 It was into this dark, despairing time that God started a revolution. It started quietly at first, with the providential invention, of all things, of the printing press. In Germany during the 1400s, a man named Johannes Gutenberg invented what came to be known as the printing press, a device which greatly increased the speed at which books could be printed…and produced them in prices that people could afford. Note the lines upon which freshly printed pages have been hung so that the ink will dry without being smudged. This may appear to be a laborious and time-consuming process to modern eyes, but up until the invention of the Gutenberg press, all books had to be hand-lettered, a process that could take many months just to produce one single book. Thus, all books, including the Bible, were very expensive, and only the wealthy, privileged and political/religious elite had access to them.

Courageous early reformers – called “Protest-ants” because they were protesting against the oppression Rome - paid with their life’s blood for the crime of translating the Bible into other languages. Other reformers spent their lives smuggling and distributing these Bibles all over Europe. People could now read for themselves what God’s Word said. The “light” was beginning to dawn all over Europe.

Through the providential invention of the printing press, and with the courageous actions of the reformers who translated the Bible into the languages of the people, the Roman Catholic Church was beginning to lose its control over the will of the people. The common people no longer had to rely upon monks and priests to “explain” the way of salvation to them. They could now read for themselves.

Some of the best known figures of the Reformation:

John Wycliffe (1320-1384) was best known for working with a colleague to translate the Bible into English. He also stated that the monks had no power to forgive sins, and that to claim such was fraudulent and unbiblical. "Who can forgive sins?" Wycliffe taught: "God alone!"

John Huss (1369-1415) translated Wycliffe’s works into Czech, and also exposed superstitions, fraudulent "miracles" and papal indulgences. He paid for his “crimes” against Rome by being burned at the stake.

Martin Luther (1483-1546) Perhaps the best known of the Reformers, Luther was a German monk who yearned for peace with God….he found it in studying the book of Romans, which he realized taught that man is justified by faith in Christ alone, and not through works. After realizing that the Roman Catholic Church was keeping the people enslaved through emphasizing good works as efficacious for salvation, as well as teaching superstitions and tradition, he wrote a famous document entitled the 95 Theses, and on October 31, 1517, nailed this document to a church door in Wittenberg, Germany. This action became known as the spark that lit the fuse that ignited the Reformation.

Martin Luther particularly despised the selling of what were known as "Indulgences." The Catholic priests of that time invented a little rhyme, well-known even to Catholics today, to encourage the sale of Indulgences:


"When a coin in the coffer rings, a soul from Purgatory springs."

Indulgences were a man-made tradition, found nowhere in Scripture, which were claimed to reduce one's time in "Purgatory," something that also does not exist and was also a man-made teaching. The Catholic church had grown very wealthy through scaremongering people, who had no access to God's word, into paying into this system of Indulgences.


During his lifetime, Luther was hard-pressed from all sides to recant his view of salvation by grace alone through faith alone in Christ alone (Eph 2:8-9), but he would not. It was at the Diet of Worms (a council drawn up to exert pressure upon Luther to recant) that he gave what came to be one of his best known dissertations in opposition to the Roman Catholic Church, as well as a concise defense of the Protestant faith. Excerpt below:


"Unless I am convinced by the testimony of the Scriptures or by clear reason (for I do not trust either in the Pope or in councils alone, since it is well known that they have often erred and contradicted themselves), I am bound by the Scriptures I have quoted and my conscience is captive to the Word of God. I cannot and will not recant anything, since it is neither safe nor right to go against conscience. May God help me. Amen"

Although many of the Reformers paid for their "crimes" against Rome with their lives, God providentially provided protection for Martin Luther, who spent 10 years translating the New Testament into German. Luther married a former nun who had also renounced her ties to Rome, and the couple had five children. Martin Luther is credited with founding the Lutheran church.

Ulrich Zwingli (1484-1531) Zwingli brought the Protestant Reformation to Switzerland, and engaged in what came to be known as the Marburg Colloquy, in which he and Martin Luther disputed various theological points. These theological distinctives, while within orthodoxy, were enough to keep the two Reformers from reaching agreement on these issues, although they did still affirm each other as brothers in the faith, and the Reformation continued.

William Tyndale (1494-1536) Tyndale was an English scholar who is known for his translation work. Tyndale authored the first English translation of the Bible that came directly from the Hebrew and Greek texts. Tyndale was burned at the stake in 1536. His crimes: translating the Bible, smuggling copies of the Bible into England in bales of cotton.

Thomas Cranmer (1489-1556) was known as the "reluctant reformer" because he believed in reform, but wanted to see reforms from within the Catholic Church. For a season he seemed to capitulate to the demands of Rome, but in the end, he publicly broke all ties to the Roman Catholic system and went to his death (he was burned at the stake) as a Protestant martyr. When Cranmer was taken to the stake upon which he was to be burned, the hand he had used to communicate his ties to Rome was the first thing he plunged into the flame, stating: "As my hand offended, writing contrary to my heart, my hand shall first be punished."

John Calvin (1509-1564) Originally trained as a lawyer, Frenchman John Calvin eventually became a key figure in the Reformation after breaking with Rome. His teaching earned him an exile in Switzerland of three years, after which he published The Institutes of Christian Religion. Calvin was a prolific writer, and during his lifetime he authored commentaries on almost every book of the Bible. His writings are credited with being foundational to the formation of the Presbyterian church.

John Knox (1514-1572) Known as the "Thundering Scot" because of his fiery preaching, John Knox led the Protestant Reformation in his homeland of Scotland, and was known for his courage. As a result of his preaching, Knox endured imprisonment in 1547 for two years as a galley slave. This grueling punishment was the cause of enduring health problems that plagued him for the rest of his life. Knox's boldness and unwavering devotion to the cause of the Reformation brought him head to head with Mary Queen of Scots who had re-established Roman Catholicism in Scotland at one point during several turbulent years of the Reformation. Known for her charm, Mary Queen of Scots was unable to work her wiles on the steadfast Scotsman with whom she had many contentious meetings. Upon his gravestone were carved the words: "Here lies one who never feared any flesh."

The Latin phrase “Post Tenebras Lux” (After Darkness, Light), then, was used to sum up what had happened during the Reformation: Truth, in the form of God’s Word, was being widely read by the common people. And into this dark world of pagan superstition, mysticism and religious tradition, people were understanding for themselves the way to salvation, which was through faith in Christ.

But if Post Tenebras Lux was the rallying cry of the Reformation, it was the Five Solas that came to stand for the core theological beliefs of the Reformers:

In our next article, we'll go into the Five Solas and discuss specifically how the Solas challenged and corrected the false theology of the Roman Catholic church which had taught salvation through one’s own merit, mystical practices and the sacraments. Below is a snippet of one of my favorite Reformation movies, "Luther," which stars Joseph Fiennes. You can order the entire movie here at Amazon

Christianity vs. Roman Catholicism - A Side-By-Side Chart of the Beliefs (Sola Sisters)

The Reformation (a short paper written by my oldest son)

After The Darkness, Light (a short paper written by my youngest son)

The Myth of Mother Teresa (Challies)