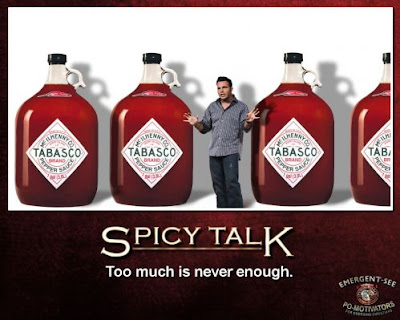 From the Pyromaniacs blog:

❝In a post last week, I pointed out that the preposterous claims, unhinged behavior, and spiritual quackery that are so prominent at the charismatic movement's lunatic fringe are by no means limited to the outer edges. Goofiness and gullibility are necessary byproducts of a belief system that fails to take seriously the principle of Sola Scriptura and its ramifications (i.e., the authority and sufficiency of Scripture).

Here's a sample of the kind of thing I was referring to: The video below features Mark Driscoll, claiming the Holy Spirit regularly gives him graphic visions showing acts of rape, fornicators in flagrante delicto, and sexual child molesters in the very act. WARNING: This is an extremely disturbing video, for multiple reasons.....❞ (Continue reading here)

As far as Mark Driscoll (and other Type-R Charismatics), I keep hearing that we cessationists should all just sit down and relax. Uh, really? I don't think so. The Type R-Charismatics article is especially good, in that it points out that even cracking the door a teeny tiny bit for non-cessationism seems to follow a trajectory that ends not so much in the wild wackiness of rooster crowing and the like (of the Charismania vein), but more seriously, to a functional rejection of the principle of Sola Scriptura, in which lip service is paid to Sola Scriptura but visions and experiences ultimately seem to become the focus and the guiding principle.

Please read the articles linked above. With respect to Mark Driscoll, the Prosecution rests.