Why do people become fixated on conspiracy theories? And what is going on with those Super Bowl and Grammys and MTV performances? It’s our view that Christians become fixated on conspiracy theories because they want to understand and better navigate the world, which is increasingly dark. But we contend that looking at conspiracy theories is a wrong focus, it’s time poorly spent. For some, the study of conspiracy theories becomes almost a gnostic kind of piety, to be the person who is in the know, the one who has broken the code. But this is pride, and not becoming to the Christian. What the LORD desires for us to know, He gives to us in his Word. We are the finite, created thing; we are not the Creator, and so it is not given to us to know all things.


“The secret things belong to the LORD our God, but the things that are revealed belong to us and to our children forever, that we may do all the words of this law.” (Deuteronomy 29:29)

Obviously, we are living in a wicked time, a time that is becoming more and more wicked with each passing year. Our culture is hyper-sexualized. Many thousands of babies are murdered every year by being aborted. There is rampant fornication and immorality and violence all around us. In short, our culture has cast off all moral restraint. There's not even a pretense of it anymore. And so, it is to be expected that the celebrities this immoral, hyper-sexualized, sensation-seeking culture chooses to build up and idolize will reflect those values (or lack of values). And they do. They sing songs with lyrics that celebrate wickedness, fornication and the latest cause du jour, normalized homosexuality. So should it really be any surprise that the performances of these celebrities at one of the most-viewed events of the year would be over the top in every way? That's what we know and can see plainly, and that's what we should be dealing with. We don't need to deconstruct costumes or hand signals in order to know that the lyrics of Katy Perry's songs are wicked. The lyrics celebrate bisexuality, and we don't need to do any code-cracking on a conspiracy website in order to know whether or not that's wrong. We can know it's wrong from God's word.

And as far as high-level, global conspiracies in the way that conspiracy theorists generally think of them, which interconnect the government, the pharmaceutical industry, the military, past and present world leaders, the banking industry, corporate heads, and even farmers?  The very idea not only stretches the bounds of credulity, but it's just simply not possible. (Listen here to an in-depth discussion about conspiracy theories, and why they are not possible as they are commonly thought to exist.) Conspiracies, actual conspiracies, don’t hold together because of human frailty: fear, conscience, pride, etc. As Chuck Colson pointed out in his book “Born Again”, the Watergate conspiracy in which he was involved, an actual political conspiracy that occurred in the late 1970s, demonstrates that conspiracies fall apart or are exposed in relatively short order.


“Watergate embroiled 12 of the most powerful men in the world, and they couldn't keep a lie for three weeks.”


Truth, Lies and Where Christians Should Put Their Focus 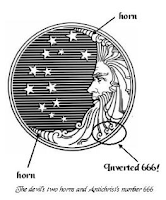 And to go a step further, from a Christian perspective, for Christians to repeat information such as this without verifying it, is to bear false witness (transgression of the 9th Commandment). As we say often here, truth is important, because God is the author of truth. Truth is important to God, and so it ought to be important to us. This means that we have an obligation to verify whether things that we repeat are true or not.

Yet studying symbols, deconstructing hand signs and poring over conspiracy theory sites which put out all manner of outrageous speculation, are a staple among conspiracy theorists. Just put "Illimuniti" into a Google search engine, and see what you get: 45 million stories in a split second (0.25 seconds, to be exact), that's what you get. That's a rabbit hole from which a person might never emerge. But is this where God wants us to put our focus and spend time?

A theory is just that: a theory, a guess, a speculation about something for which there is no proof. By contrast, truth is what we know to be true, and as Christians, we know that God is the author of truth, and also that truth is centered upon the person and work of Christ. Therefore, truth is important.

“But the word of the Lord remains forever. And this word is the good news that was preached to you.” (1 Peter 1:25)

So what do conspiracy theories have to do with truth?

Where conspiracies are directly addressed in scripture, this is what we are told:

As the passage from Isaiah points out, the Lord of hosts, God, should be our focus.

The Gospel of Matthew also gives us an account of the disciple Peter stepping out of the storm-tossed boat and beginning to walk toward Christ on the water... until he began to sink after taking his eyes off Christ, and putting his focus on the wind which was whipping around him:


“Peter said to Him, ‘Lord, if it is You, command me to come to You on the water.’ And Jesus said, ‘Come!’ And Peter got out of the boat, and walked on the water and came toward Him. But seeing the wind, he became frightened, and beginning to sink, he cried out, ‘Lord, save me!’ Immediately Jesus stretched out His hand and took hold of him, and said to him, ‘You of little faith, why did you doubt?’ When they got into the boat, the wind stopped. And those who were in the boat worshiped Him, saying, ‘You are certainly God’s Son!’” (Matthew 14:28-32)

We also know that God is sovereign, and that nothing that is occurring around us is taking Him by surprise. We can trust Him. We can rest in Him. We belong to the One who knows the end from the beginning. God the Father will give us strength and peace in whatever trials may come. God the Son will give peace to those who abide in him. God the Spirit will give us a sense of peace and comfort.


God the Father - “God is our refuge and strength, an ever-present help in times of trouble.” (Psalm 46:1)  “I make known the end from the beginning, from ancient times, what is still to come. I say, ‘My purpose will stand, and I will do all that I please.’” (Isaiah 46:10)

God the Son -  “Abide in Me, and I in you. As the branch cannot bear fruit of itself unless it abides in the vine, so neither can you unless you abide in Me. I am the vine, you are the branches; he who abides in Me and I in him, he bears much fruit, for apart from Me you can do nothing.” (John 15:4-5)

God the Holy Spirit - “But the Comforter, who is the Holy Spirit, whom the Father will send in my name, he shall teach you all things, and bring all things to your remembrance, whatsoever I have said unto you.” (John 14:26) “Take My yoke upon you and learn from Me; for I am gentle and humble in heart, and you will find rest for your souls.” (Matthew 11:29)

What is the fruit that God the Son references in the Gospel of John? It is not the fruit of studying conspiracy theories and explaining them. It is gospel fruit. It is the fruit that comes from sharing Christ with the lost, perhaps even those trying to deconstruct alleged conspiracies as they also attempt to make sense of this world? To those people, we can bring the light and the hope of a Saviour who gave his life “as a ransom for many.” And what is the rest for our souls that is referenced in the Gospel of Matthew? It is rest in knowing that our salvation is secure because of Christ, and that we look not to this world, but toward the world to come.

Is there a balanced way for Christians to view conspiracy theories? The answer is yes, there is. Simply put, it involves first and foremost keeping our eyes fixed upon Christ, and then weighing actual evidence, and not just relying on anecdotal accounts or speculation or the first 10 websites provided by a Google search (or in the instance of an Illuminati Google search, the first 45 million websites). Of all people, Christians know that there is real evil in the world, and that we have a real Adversary, a real spiritual presence that is alive and well and active in the world today ("Be sober-minded; be watchful. Your adversary the devil prowls around like a roaring lion, seeking someone to devour." 1 Peter 5:8). But, we also know that a sovereign Lord rules and reigns over all the affairs of man, and that what we are commanded to do is simple: keep our eyes fixed on Christ, the author and perfecter of our faith, contend for truth, love and serve our families and churches, and share the gospel.

Christian and conspiracy theories, the Christian and witnessing (2-11-15)
Posted by Christine Pack at 1:54 PM