T.D. Jakes: Through a Glass Blurrily

By Marcia Montenegro (Christians Answers For The New Age)


“But false prophets also arose among the people, just as there will also be false teachers among you, who will secretly introduce destructive heresies, even denying the Master who bought them, bringing swift destruction upon themselves. Many will follow their sensuality, and because of them the way of the truth will be maligned; and in their greed they will exploit you with false words; their judgment from long ago is not idle, and their destruction is not asleep.” 2 Peter 2:1-3

The Trinitarian God is revealed in God’s word and has been confessed by Christians throughout the centuries. And during that time, the Trinity has also been attacked and denied by many. Satan is always assailing the nature of God with a multitude of false teachings and heresies. The early anti-Trinitarians, such as Arius and Sabellius, were condemned as heretics.

Anti-Trinitarian beliefs are many and often differ drastically from each other. There are even variations within the same views. Modalism is only one of these anti-trinitarian teachings, and is also called “Oneness.” It is the belief that, instead of three Persons in the Godhead, God has three “modes:” Father, Son and Holy Spirit.

Modalism is not always expressed the same way. For example, a modalist may not necessarily use the term “modes” or the label “modalist.”

T. D. Jakes (born 1957) has been known as a modalist or “Oneness” minister. There is a lot of information supporting Jakes’ modalism, including the statement about God on his church’s website that uses the classic modalistic phrase about God in three manifestations. Jakes, who has no theological training, preached his first sermon at 19; was “licensed as a minister in the Church” at 20; and at age 23, planted his first church in West Virginia, a Oneness church (quote and other information from the Potter House website here).

Jakes' title of “Bishop” comes from the Higher Ground Always Abounding Assemblies (HGAAA), a network of Oneness Pentecostal churches. This title was given in recognition of his position as a prelate of this organization. According to the HGAAA website, Jakes gave several talks in 2011 sponsored by HGAAA and is listed as a speaker at this year’s upcoming “24th Annual Holy Convocation” in June 2012. His is listed in the HGAAA Directory as Vice-Prelate. 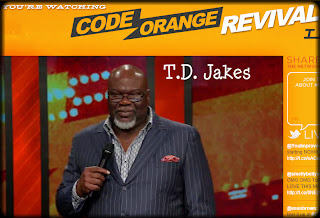 Jakes was invited this past January to be a speaker at a revival called Code Orange, held at a large evangelical church in Charlotte, NC, called Elevation, pastored by Steve Furtick. This event was disturbing for many Christians because Jakes, as a known Oneness follower, denies an essential of the faith and cannot be considered a brother in Christ. Furtick may have thought that Jakes had become a Trinitarian. However, if that had been the case, then it should have been announced. To give Jakes, a non-Trinitarian, a platform in a church violates 2 John 7-11.

Not long after Code Orange, on Jan. 25, Jakes was the guest in what is called the “Elephant Room” (this is a meeting/interview event that has been somewhat controversial due to various reasons) to be interviewed by a well known Reformed pastor, James MacDonald, and pastor Mark Driscoll. MacDonald, in fact, had recently resigned from the Gospel Coalition, a group of Reformed pastors, due to disagreement over his invitation of Jakes to the Elephant Room (known this year as ER2). 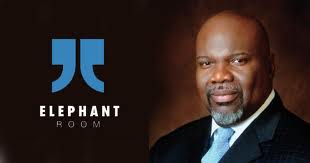 This is the only transcript available at this point of the Elephant Room dialogue with Jakes.

My brief comments on this available interview (James MacDonald has posted on his blog that he had decided not to release the full transcript) follow.

Unclear/ambivalent statements by Jakes are bracketed by ==, followed by my comments:

==“But how they describe and explain the Godhead in a traditional oneness sense is very, very different from how Trinitarians describe the gospel.”==

COMMENT: This raises the question: Does this mean that Jakes thinks only the verbal description differs?

==“He is one God who expressed Himself in a plurality of ways.”==

==“I don’t think anything that any of us believes fully describes who God is. And if we would ever humble down to admit that we in our finite minds cannot fully describe an infinite God.”==

COMMENT: Actually, God has revealed himself clearly as a Trinitarian God. Jakes in the past has used this ruse of how nobody can really know God, implying that a discussion of the Trinity is either unimportant or impossible. However, we can describe God according to what God has revealed to us about himself.

==“Three Persons. One God – Three Persons, . ..[ . . .] . . . I am not crazy about the word persons this is…most people who follow me know that that is really. My doctrinal statement is no different from yours except the word…”==

Jakes: ==“Manifest instead of persons. Which you describe as modalist, but I describe it as Pauline.”==

COMMENT: It looks possibly like Jakes is equating "Persons" with "manifestations." If so, we are back to square zero with Jakes and the Trinity. Also, it is not “Pauline” to say God manifests as three persons. Jakes and other Oneness followers, in an effort to bolster their stance, point to scriptures such as 1 Tim. 2:10 and 3:16, Heb. 9:8, and 1 John 3:5 where the word “manifest” means to “appear” or “disclose.” However, these scriptures and the use of the word “manifest” in them have nothing to do with a belief that God is a being who takes on the role of three beings.

==“I think that it is important that we realize that there are distinctives between the Father and the working of the Son. The Father didn’t bleed, the Father didn’t die, only a different person in Jesus Christ…is coming back for us in the person of Jesus Christ. Jesus Christ is with us, but only indwells us through the person of the Holy Spirit; we are baptized into the body of Christ by the power of the Holy Spirit. I don’t think any of that is objectionable to any of the three of us. So that is consistent with my belief system.”==

COMMENT: A modalist could say that the Father didn’t bleed because he (he Father) was in the role of Jesus at the time of the cross, so it was Jesus who bled. So this is no affirmation of the Trinity. Also, saying that one is baptized “into the body of Christ by the power of the Holy Spirit” could be said by a modalist. It is unclear what Jakes means by this. Is he referring to water baptism, which Oneness Pentecostals believe is necessary for salvation?

==“I’m with you. I have been with you. I teach/preach that all the time. There are many people within and outside quote unquote denominations labeled Oneness that would describe that the same way. There are some that would not. But when we get to know people by their labels, then comes all the baggage of how we define that label.”==

COMMENT: Jakes says that he's been teaching this all along! Yes, he has been teaching modalism all along. Jakes has never been on record affirming or teaching the Trinity; in fact, he has reacted negatively to questioning on the topic. If anything, this is an admission to Oneness beliefs.  He also plainly states that Oneness is not really different from Trinitarian, or at least he wants it to sound that way. He is also back to the “description” remark because for Jakes, it seems to be just a semantics issue. That is what he has said in the past about the difference between Trinitarian and non-Trinitarian views.

==“I still have fellowship, associations, relationship, and positions within and without Trinitarian and Onenness movements.”==

COMMENT: A Trinitarian can have a friendship, but not fellowship, with Oneness followers and modalists. Fellowship is only within the body of Christ. This statement is very revealing and indicates Jakes still doesn't get it, or is trying to blur the line between modalism and Trinitarianism, something many believe he has been doing for years.

If Jakes has truly become Trinitarian, then he needs to relinquish his title of “Bishop,” make a clean break with the HGAAA, clearly affirm and teach the Trinity to his church, and renounce modalism. Jakes has been misleading his flock with false teaching for years (this includes the Word of Faith and prosperity gospel, which is another deeply problematic issue). I certainly allow for a small possibility of Jakes’ conversion to the true God, but until these outward evidences, we cannot declare Jakes a Trinitarian.

This event, judging by some defending the claim that Jakes is now a Trinitarian, has revealed either a crack in the knowledge about the Trinity amongst some Christian leaders, and/or an apathy to the Trinity. But if Christians do not get the nature of God right, we cannot truly preach the gospel. Like sheep, we tend to stray.

A reaffirmation of the Trinity and more teaching on it in churches would be a good result of this rather depressing affair. There is no salvation in modalism; it is false. Therefore, this is of utmost important because this is a salvation issue.

There is a link to the Athanasian Creed at the end of the links below. Please read it if you have never read it before.

On the Jakes Interview:

Excellent interview of former Oneness pastor Jordan Dayoub who gives his views on Jakes, and whose insights are extremely instructive on this issue

Informative remarks by Daniel Neades on modalism, the Trinity, and the interview with T. D. Jakes, and why Jakes’ remarks are troubling

Minister Voddie Baucham who was invited to the ER2 interview with Jakes, on why he declined and why later he withdrew from speaking at a men’s conference sponsored by James MacDonald

Concerns About the Teaching of T.D. Jakes

Watchman.org (Put the word Trinity in search box at this link and links will come up to several articles)

On Sabellianism and Modalism:

"Oneness Doctrine" (Jesus Only) vs. Trinitarianism

The Athanasian Creed, which affirms the Trinity
Posted by Christine Pack at 10:54 PM