Andy Stanley Thinks President Obama Should Be Known as "Pastor In Chief?"


"President Obama’s recent response to the shooting at Sandy Hook Elementary School in Newtown, Conn., convinced the pastor who preached at this morning’s pre-inaugural church service that the president has the cleric’s touch.......Obama should be called 'Pastor in Chief,' said Andy Stanley, pastor of North Point Community Church in Alpharetta, Ga., after he 'thanked POTUS for work after Newtown shooting tragedy when he spoke to mourners.'" 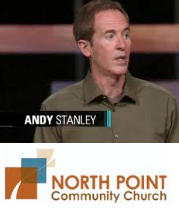 My friends, are these the words of a biblical pastor? Please bear in mind that Andy Stanley, Atlanta megachurch pastor and son of Pastor Charles Stanley, is heaping praise upon the same President who said in yesterday's Inaugural Address:


"Our journey is not complete until our gay brothers and sisters are treated like anyone else under the law, for if we are truly created equal, then surely the love we commit to one another must be equal as well." (Source)

Stanley is, unfortunately, giving the appearance of being bound to numbers and political access rather than fidelity to Scripture. But then again, perhaps gay-affirming President Obama and Andy Stanley have more in common than meets the eye at first glance. After all, Stanley is the same pastor who appeared to give tentatively gay-affirming signals over a recent conflict that he openly addressed in a sermon and which played out at his church. (The conflict in question involved a woman, her ex-husband, her ex-husband's male lover, and the male lover's wife. Yes, really.)

One wonders how this will all play out. In Atlanta where I am, Andy Stanley is considered to be solid, biblical and conservative. Perhaps stories such as these will open the eyes of the faithful remnant.

The Need for Elders Who Guard Their Flocks (Criticial Issues Commentary, Bob DeWaay)
Posted by Christine Pack at 6:57 PM