Answers in Genesis Kicked Out of Homeschooling Conferences

Answers in Genesis, an excellent ministry devoted to biblical truth, was recently kicked out of two homeschool conventions over the issue of young earth/old earth. This "uninviting" happened when Ken Ham, President of Answers in Genesis, wrote and talked about his concerns regarding another of the scheduled speakers at a homeschool conference at which Ken Ham had also been invited to speak. Apparently, this didn't sit well with the organizer of the homeschooling conventions, Brennan Dean (Great Homeschool Conventions). The speaker in question was Dr. Peter Enns, one of the co-founders of The Biologos Foundation. From the moment they burst onto the scene, Biologos has generated controversy due to their tendency to allegorize what ought not to be allegorized as well as their firm stance on evolution (in their view, a literal six day creation is scientifically untenable).

Dr. Enns will undoubtedly promote the beliefs of the Biologos Foundation while at these conventions, and Ken Ham, in good conscience, felt he could not speak at these conferences without alerting the homeschooling families to the dangers of the Biologos homeschool curriculum, which advance their liberal and allegorical views of Scripture. From Ken Ham's online article about this:


"Because Dr. Enns of BioLogos was speaking at Mr. Dean’s conventions to promote a Bible curriculum to homeschoolers, which we consider very dangerous to the spiritual upbringing of kids, we wanted to make sure that people knew what he believed.

Ken Ham did mention Peter Enns by name in one of his five talks at an earlier South Carolina convention in Greenville organized by Mr. Dean. Ken showed two video clips of Dr. Enns, done in the context of showing how some modern Christian speakers are compromising God’s Word in Genesis. Ken did say that Dr. Enns was also speaking at the conference and had connections to another convention speaker, Susan Wise Bauer. In another talk about a common Christian viewpoint that compromises Genesis, Ken briefly mentioned that one of the speakers at this convention took that view."

And also Dr. Peter Ennis from the Biologos website:


"In my last post I suggested that the Adam story could be viewed symbolically as a story of Israel’s beginnings, not as the story of humanity from ground zero.

But some might ask, “Why go through all this trouble? Why not just take it literally? The Bible says Adam was the first man. That’s the end of it.”

It’s not that simple, and if it were, people wouldn’t be talking it about it so much. First of all, reading the Adam story symbolically rather than as a literal description of history is not a whim, and it is certainly not driven by a desire to undermine the Bible. Rather, as we have seen, the Bible itself invites a symbolic reading by using cosmic battle imagery and by drawing parallels between Adam and Israel (to name two factors)." 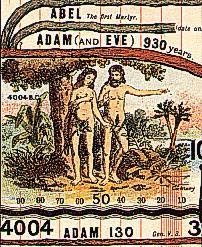 As I have written before, allegory is a very slippery slope. I grew up faithfully attending a church that was very liberal, and taught much of the Bible as allegory. We loved our church and were involved in many activities: choir, Sunday school, youth group, food drives, retreats, etc., etc. But as I said, it was a very liberal church, and by that I mean, I can't say that I ever heard a clear gospel message in all the years that we attended.  The Bible was sort of viewed as the message given to us by God about how to live Godly lives, with Jesus of course as the primary example.  I remember hearing the story of Adam and Eve as a child in Sunday school, but being told, "Of course, this didn't literally happen since we know that the earth is millions of years old."  Obviously, we were told, God was speaking in metaphorical terms here.  "Adam" as a representative figure of mankind, and "Eve" as as representative figure for womankind.  But there was never a literal "Adam" and a literal "Eve!"

Along with this, we were taught that Jesus didn't really perform all the miracles accredited to him by the gospel accounts.  One class in particular stands out in my mind: a teacher earnestly laboring to help us see that Jesus couldn't have possibly fed 5,000 people with just one small meal.  What really happened, he explained to us, was that Jesus brought the little boy with the five loaves of bread and two fishes before the crowd, and the people, being moved by seeing such generosity of spirit in a child, were shamed into pulling out their own secret stashes and sharing.  As for myself, I'm convinced that this was how the teaching of Jesus-as-a-great-moral-example became so deeply entrenched in liberal circles. Liberal theologians have long bent the knee to the false "god" of science (the earth is millions of years old, miracles aren't possible, etc.), and in doing so, have had to find a way to explain the "miracles" of Jesus in human terms.  So they came up with, among other things, a generous little boy and "secret stashes."

Brothers and sisters, political and cultural things are fine to mobilize over, but this issue of allegorizing the clear teaching of Scripture is at the very heart of today's spiritual battle. Calls and letters from homeschooling families might be a good thing here.

(Read the entire article from Ken Ham/Answers in Genesis here)


Answers in Genesis Kicked Out of TWO Homeschooling Conferences

Who Says The 'Begats' Are Boring?

Grace To You Weighs in on Biologos

A List of Today's Scientists Who Support Six Day Creation
Posted by Christine Pack at 9:29 PM