"Not that I am speaking of being in need, for I have learned in whatever situation I am to be content. I know how to be brought low, and I know how to abound. In any and every circumstance, I have learned the secret of facing plenty and hunger, abundance and need. I can do all things through him who strengthens me." Philippians 4:11-13

Below are excerpts from an excellent sermon delivered by Jeremy Clarke, pastor of Legacy Baptist Church in Northwest Arkansas.  This sermon, Discipleship Part 1, is part of an expository series and can be downloaded in its entirety here.

❝God does not suggest that we ought to be content in his care and provision; He commands it.  Contentment is biblically described as freedom from external need due to confidence in God's adequate provision.  There is an intrinsic relationship between being content and your faith.  If you have Christ, you have all that you need.  Conversely, if a man has everything and doesn't have Christ, he has nothing. 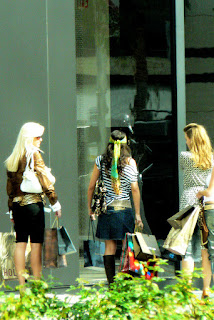 And yet the church reflects so much of the world in this, I fear.....I'm convinced that the more people have the more discontent they become.  The church in America is literally saturated with discontented people who've been incubated in this soil of American consumerism.  They're just grumbling and complaining and covetous consumers.....it's really quite sad.  Listen to me.  Few sins are uglier to God than complaining.   Few sins hinder our effectiveness for the gospel more than discontentedness.  And because that's true, my children will tell you, that nothing is dealt with more severely in my own home than complaining and discontentedness.  Complaining at the Clarke home will typically elicit a very swift response.  I'm particularly sensitive to that issue as a parent and as a pastor, and I'm convinced that the greatest threat that faces our children is not drugs or promiscuity, the greatest threat that faces our children today is the seed of Christless discontent germinating in the soil of a home that presents a child with every temporal whim under the sun, and in doing so ignores or at least neutralizes the responsibility of pointing these young reprobates to Christ, and his sufficiency.  And children do not come into the world, content, do they?  Not by any stretch of the imagination. As we'll learn in the coming weeks, contentment must be learned.  Paul said, "I've learned to be content."  Discontent in the home must receive a swift, decisive sentence, or your child's heart will be given over fully to do evil.

The American church today is rich in a way that is foreign to the rest of the world.  And yet the church in America seems to find more to complain about, and the most minute issues to grumble about, and subsequently there seems to be very little humility in the church today, very little thankfulness, very little gratitude.  Servanthood seems almost to have been replaced by expectation, which does nothing but further feed discontent.  I'm standing here telling you that until we become servants and stop being some discontented customers, we will never attain to the deep intimate knowledge of the Son of God.  Never ever.

Every complaint that breaches your mouth, that breaches my mouth, is an expression of faithlessness.  Further, it's an indictment against a sovereign God who ordained the circumstances under which you are complaining.  All of your complaints and all of my complaints, one way or another, are complaints against the providential purpose and will of God.  And they do nothing but hinder your spiritual growth and your advance in Christ.  Discontent is devastating.  It's a devastating sin.  So let's not confuse contentment with just some nice, Christian virtue.  That's not what contentment is.  On the contrary, this is so serious, this issue of contentment, that it is nothing less than a divine precept.  It is commanded by God.  You're to be content with whatever you have, you're to be content with food and wages and clothing and your spouse.  This isn't a request.  It's not a suggestion, it is a command.

To complain about something is to complain about the circumstances that God has ordained.   You can put that in context of our lives today.  Pull up to the gas station, and you see it's $3.50 - oh, for crying out loud, this is crazy, $3.50?  These are circumstances that God has ordained, I don't have the right to complain about these things.  I  don't need to get fearful or concerned, because God promises to never leave me nor forsake me.  You go to start your car one morning, it doesn't work, and you go, ah, great, this is crazy, this is just not gonna do.  Does it not all belong to God? Has He abdicated? Is He not still on the throne? Is this not his car, are you not his child, does the road not belong to him, and the mechanic that you'll see, are these not all under the sovereignty of God?  Don't I give the mechanic breath, and the skills that he has, don't they come from me? Oh, fearful, grumbling, complaining child of God.  Relinquish your complaining. You are complaining against the circumstances that God has ordained.

God's Word declares it, and you and I are to comply.  We could end right there this morning, couldn't we?  God offers much more than that, though.  God doesn't just issue a command, He gives us the means by which we are to comply, the regenerative properties of his Spirit.  So God motivates us toward obedience by changing the principles and features of our hearts and motives and inclinations, so that we not only can, but long, to comply.  So we're to comply, but righteous duty is all but completely obscured in today's church by this matter of discontent.  Duty is not a popular word in the church in America. I think every one of us would agree with that.  Few Christians see their sojourn on earth as a duty, a divine enlistment.  The church today knows a whole lot about freedom, a whole lot about fulfillment, all of that kind of stuff, but it is calloused to words like 'commission,' 'obedience,' 'surrender,' 'charge,' 'duty,' 'sacrifice.'  We live in a self-absorbed, indulgent time, and we're insulated by all sorts of resources and comforts.  We've fostered a culture of expectation, a culture of preoccupation with whatever meets our 'felt needs.'  It ought not to be that way.  And around and around the church goes in this Americana, feel-good kind of spiritual haze: spiritually uncommitted, spiritually immature, possessing little if any discernment, little if any Biblical conviction, little if any aptitude for service and devotion and sacrifice.  Now listen to me: God's will, and the majesty of his infallible Word, is all that we need to motivate us toward compliance.  That's it.  It's all that we need to captivate us into obedience. You are to be content, and I am to be content, because the holiness of God demands it.

We are to be content because we understand that we serve an infinitely holy, inifinitely supernatural, omnipotent, majestic, resourceful God who says 'I will never leave you nor forsake you.'  He's a God who is faithful to his promises.  To be discontent is to trample that promise underfoot.  In fact, it's to call God a liar.

The operation of your life runs directly proportional to your view of God.  It's a critical thing for Christians to understand.  It's a simple formula that says this: to the extent that you understand God's holiness, to that extent you don't complain.  And I truly believe that this is Ground Zero for the church today, coming back to a vivid hunger for understanding the holiness of God, the majesty of God.  It's missing in the church today, and I think it has a lot to do with the saccharine teaching that has developed over the last 150 years.  The church today is not the same as it was 150 years ago. We've lost our solemn appreciation for the holiness of God. Our radios are turned to Christian presets that have lots of nice songs, and we come to churches that foster lots of nice feelings and emotions, lots of nice thoughts, but there is little or no acknowledgment of the incomprehensible holiness of God Almighty.

You scour your Bible, and you will see that any account of an encounter with God is accompanied by an overwhelming sense of sin and holy terror.  That's what it means to be confronted by the holiness of God.  And if at this very moment the Lord of glory would reveal to us here in this room just how detestable our discontent is before him, every breathing soul in this room would be prostrate on the floor, mourning in sorrow over that sin.  We don't have an inkling.

And don't miss this: discontent in the heart is revealed in the mouth.  Those who complain most are those who are the most ignorant of the holiness of God.  Out of the abundance of the heart, the mouth speaks.  There is a critical relationship between a man's humility and his embrace of the holiness of God.  That embrace is revealed at the point of his speech.  I'm convinced that the greatest expression of ignorance of the character of God is expressed in complaining, in grumbling and in discontent.  Lamentations 3:39 "Why should any living mortal, any man, offer complaint in view of his sin?"  That Scripture is saying: you must have lost your mind, to offer complaint in view of the immense sin in your life.  I'm speaking about myself as well. Why on earth would we offer complaint in light of our sin?  You ought to underline that verse in your Bible, you ought to teach it diligently to your children, you ought to put it on the cornerposts of your home, you ought to wake up, and rise up, with that thought ever before you.  If your children complain, if you complain, swiftly and decisively deal with that sin.  Put it to bed.❞

Posted by Christine Pack at 7:00 AM