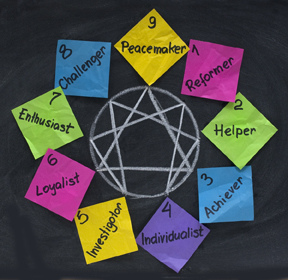 In a recent article, popular emergent author Donald Miller (Blue Like Jazz) pondered who feels closer to God: liberal theologians or conservative theologians.  In this article, Miller also deconstructed the personality traits of both liberals v. conservatives through the use of something known as the Enneagram in an effort to answer this question.  What in the world is the Enneagram? I'm so glad you asked, because it is something that is rapidly gaining popularity in Christian circles, but it is far from Christian in its beliefs. The Enneagram is something that is promoted as a tool for assessing one's personality traits. More insidiously, however, it has at its root some very troubling New Age theology; chiefly, the idea that all people are born with a Divine inner spark. Rather than being Christian in nature, this view of the Divine inner spark is distinctly eastern and panentheistic:


"Our true nature is Essence. Essence and personality are not separate: personality exists in, and is made out of Essence. While we have a personality, it is only a part of the totality of our true Self. Most of the time we are entranced by our personality and do not remember our Essential nature, or who we really are." (online source)

Also, in Enneagram teachings, there does not seem to be a concept of personal sin:


"Remember that all negative behavior is the result of unprocessed pain. In the course of our work, we uncover difficult feelings, powerful Essential states, and many qualities of emptiness. The more we can learn to tolerate these different aspects of ourselves, the more quickly and smoothly our work will progress." (online source)

The closest thing the Enneagram has to the Christian concept of sin is that "unprocessed pain" (not sin) results in one's life not running as smoothly as one wishes. This is in distinct contrast to the biblical understanding of sin, and is actually more Buddhist in theology than Christian. This belief also diminishes one's personal responsibility for sinful behavior toward others. Indeed, there does not even seem to be an understanding of sin according to the Enneagram construct. Now, as a former New Ager, I can bear witness that this idea of there not being a concept or even an understanding of sin is extremely New Age.  What biblical Christians would regard as sin that needs to be repented of and turned from is, according to the Enneagram, merely "unprocessed pain" that gets in the way of one's desired life:


"Remember that it is our birthright and our natural state to be wise and noble, to be loving and generous, to esteem ourselves and others, to be creative and constantly renewing ourselves, to be engaged in the world in awe and wonder and in depth, to have courage and to be able to rely on ourselves, to be joyous and effortlessly accomplished, to be strong and effective, to be self-possessed and enjoy an unshakable peace of mind—and above all, to be present to the unfolding mystery of our lives." (online source)

The above ideas, too, are far more New Age than they are Christian. While a born again Christian is given the right to be called a child of God, and given a new heart and new desires, it is no-one's "birthright" to have the gifts listed by the Enneagram Institute:

In fact, we know from Scripture that we are born sinful, and that our only "birthright" is rightful condemnation:


"Surely I was sinful at birth, sinful from the time my mother conceived me. Surely You desire truth in the inner parts; You teach me wisdom in the inmost place." Psalm 51:5-6

"The wages of sin is death; but the free gift of God is eternal life in Christ Jesus our Lord." Romans 6:23

Not only are we born into sin, but it is God alone who is able to free us from the bondage of sin through Christ's atoning death which we access by repentance and faith. And it is God alone who grants gifts such as wisdom, a loving heart, the ability to supernaturally and selflessly love others, etc. In fact, it is not even within anyone's ability to have any of these gifts without the regenerative work of the Holy Spirit. We know from Scripture that these are gifts that only come from being born again. Without regeneration, we are wretched creatures: self-seeking, vain, prideful and unable to have peace of mind about the most important thing a human could possibly contemplate.....whether or not one is right with God.

But back to the question in Donald Miller's article: who "feels" more at home with God.....conservative theologians or liberal theologians?

I would submit that the real issue is not whether or not people "feel" at home with God, but whether or not they are actually, positionally, right with God. And this actually being right with God only comes through faith in Christ's atoning death. Hindus, Buddhists, Muslims, and Jews often "feel at home" with God....only, they're not. ONLY true, born again Christians will actually be near to God. And yet, as a practicing Hindu before becoming a born again Christian, I "felt" very near to God. Such is the deceptive nature of false religion.  In fact, when Christians would witness to me, I would laugh at them. I just knew they were wrong because my mystical experiences of "god" were so powerful and profound and spiritual that it never even occurred to me that I could be the one who was in the wrong. So what we "feel" can never be our guide about whether or not something is true. The Bible tells us that the heart (feelings), absent the regenerative work of the Holy Spirit, is deceitful, and is not to be trusted.


"The heart is deceitful above all things, and desperately wicked: who can know it?" Jeremiah 17:9

So again, back to Miller's article. Liberal/emergent theologians (like the ones mentioned in his article) do not hold to orthodox Christianity: their views of God are decidedly panentheistic/mystical in nature, and the leaders of this movement outright deny the essentials of the faith. I'm not saying people under the teachings of this movement can't ever be saved.....in fact, I believe that many of them are confused. But IF in fact they do hold to emergent theology, they are not saved. So whether or not they "feel" close to God is irrelevant. The fact would remain that, regardless of their deceitful feelings, they would be far from God because they are in rebellion to how he has revealed himself in his Word.


"We know that God does not listen to sinners. He listens to the godly man who does his will." John 9:31

"The LORD is far from the wicked but he hears the prayer of the righteous." Proverbs 15:29

We are living in a very feelings-oriented culture in which people divorce and remarry based on how they feel or don't feel about their spouses. People leave their jobs, move hundreds of miles away, end relationships, buy houses, etc., often on just a whim or a feeling. We can see all around us the effects of people being driven by their fickle feelings. But as for Christians, we know that the only sure foundation for our lives is studying, knowing and obeying God's word. In fact, I can attest for myself that studying and knowing God's Word has had a profoundly steadying influence on my life. As a feelings-driven, New Age mystic, I was the epitome of the James 1:8 person: double-minded and unstable in all my ways. And it wasn't until I began to rely solely on God's Word (the Reformation principle known as "Sola Scriptura") as a Christian, that my Christian walk actually began to be fruitful.

One of the best compliments I ever received as a Christian was from a girlfriend who was having marriage problems, and who was seeking my counsel, as her friend. After some discussion, I circled back to something I had previously commented on, and said, "You know, let me revise what I just said there. I would like to take some more time to think this through and make sure that my counsel to you lines up with God's Word." My friend got tears in her eyes and said, "This is why I came to you: I knew you wouldn't give me your thoughts and worldly wisdom. I knew you would give me truth."

I knew what she meant, and it has nothing to do with me being so smart or a good counselor or anything like that. It meant that she knows me well enough to know that I have a very high view of God's Word, and that to the best of my ability and aided by the Holy Spirit, I would attempt to give her counsel that was in alignment with what God desired of her in this matter.

Friends, we don't possess truth. But God does, and we can find it in his Word, which He divinely wrote and protected for millenium so that we might know who He is, and what He requires of us. May we hold fast to God's Word and encourage each other.....not with worldly wisdom, pop psychlogy or fickle feelings, but with real truth...God's Word.

The Enneagram GPS: The Gnostic Path To Self

What Are the Essentials of the Faith?