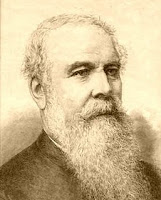 “A person’s religion may look well for a season. An ignorant eye may detect no difference between the possessor of such a religion, and a true Christian. Both may worship in the same Church. Both may use the same ordinances. Both may profess the same faith. The outward appearance of the house built on the rock, and the house without any solid foundation, may be much the same. But the day of trial and affliction is the test which the religion of the mere outward professor cannot stand. When storm and tempest beat on the house which has no foundation, the walls which looked well in sunshine and fair weather, are sure to come to the ground. The Christianity which consists of merely hearing religion taught, without doing anything, is a building which must finally fall. Great indeed will be the ruin! There is no loss like the loss of a soul.”
Posted by Christine Pack at 5:02 PM