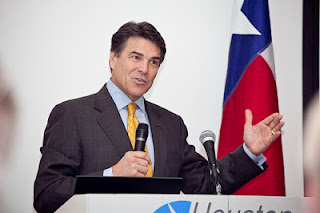 There have been many warnings over the last few weeks with regards to Rick Perry's The Response prayer event in Houston, Texas on August 6, 2011.  I shared Brannon Howse's warning on the blog a couple of weeks ago, and other warnings can be seen at Sola Sisters, an extensively detailed piece from Apprising Ministries entitled IHOP Enters Dominion/Christian Rights Politics, another piece from Howse titled The Emergence of The New Religious Right And Its Threat To The Church, Chrystal Witt's piece Divorcing America from Baal?, and Marsha West's response post-prayer event that offers great insight to the good, the bad, and the ugly that took place at The Response.

What, or who, exactly has Rick Perry aligned himself with?  The links above clearly show what is taking place behind the scenes unbeknownst to many conservative Christians.  Many participated or supported Perry's prayer event  last week, including best-selling author and watchman on the wall, Joel Rosenberg.  In fact, Rosenberg said in this article the day after the prayer event:


Some evangelicals were critical of "The Response." They urged people not to attend because they have serious and fundamental theological differences with some of those involved in the event. A few emailed me and urged me not to participate. I heard those concerns and I have strong disagreements with some of the participants, too. But the truth is the vast majority of organizers and participants of this prayer meeting were theologically, morally and ethically solid evangelical, Bible believing followers of Jesus Christ.

It is unfortunate that Rosenberg has not done his research and cannot see the undercurrent of deception that is taking place.  What's more, despite the "serious and fundamental theological differences" and having "strong disagreements with some of the participants," he chose to endorse the event anyway.

(UPDATE 9/9/11: Please click here to read an encouraging report about a recent conversation between Brannon Howse of Worldview Matters and Joel Rosenberg regarding The Response prayer event.)

Those whom we have serious and fundamental theological differences with happen to believe that before Christ will return to this earth, it is the church's mandate to pave the way for the Kingdom, that Christ won't return until the Kingdom has been established by Christian world domination.  This domination, according to dominionists, will occur by taking over the government and cultural landscape.  Lighthouse Trails has a recent piece titled, Will the Evangelical Church Sell Out the Gospel for a Dominionist Political Agenda? that offers the following definition:


The Gospel of Salvation [according to dominionism] is achieved by setting up the “Kingdom of God” as a literal and physical kingdom to be “advanced” on Earth in the present age. Some dominionists liken the New Testament Kingdom to the Old Testament Israel in ways that justify taking up the sword, or other methods of punitive judgment, to war against enemies of their kingdom. Dominionists teach that men can be coerced or compelled to enter the kingdom. They assign to the Church duties and rights that belong Scripturally only to Jesus Christ.

These, then, are not merely "strong disagreements" that we can just push to the side for the sake of unity as Rosenberg has suggested.  The compromise at hand is one that is centered on the Gospel and has major implications for the Body of Christ, of which many believers are being deceived into co-mingling, or even substituting, patriotism and moralism with our mandate in the Great Commission.  As was said in this article concerning Glenn Beck and Evangelicals from last year, "we must not compromise the Gospel on the alter of ecumenical patriotism!"

With this background, I now share with you something from the secular media.  I by no means am a fan of Rachel Maddow, but she brings up some very serious concerns even though the root of her concerns are not the same for Christians.  The following video [removed from YouTube due to copyright infringement] shows just who Rick Perry has aligned himself with, and that the New Apostolic Reformation has chosen him to be their vessel to establish the Kingdom of God on earth.  After showing various clips of C. Peter Wagner, Mike Bickle, Cindy Jacobs, and John Benefiel, Maddow closes with the following:


Rick Perry did not just do a prayer event in Texas that was a no-non Christians allowed event, Rick Perry did a prayer event that involved a specific Christian political movement, a movement that has political goals, and wants a political vehicle, and that seems to want a Rick Perry presidential candidacy to be their political vehicle.  The Texas Observer begins its story about these new self-styled apostles with a story about a visit two of them paid to Governor Perry in Austin in 2009, quote, "The pastors told Perry of God's grand plan for Texas.  A chain of powerful prophecies had proclaimed that Texas was "The Prophet State," anointed by God to lead the United States into revival and Godly government.  And the governor would have a special role."  The New Apostolic Reformation appears to have chosen Rick Perry as their candidate, as their vehicle for their political goal, which is of course, world domination, blah blah blah.  Rick Perry is announcing his unofficial start to his presidential campaign this weekend in New Hampshire, South Carolina, and Iowa, after hosting a stadium prayer event with all of these folks, and frankly, getting away with no one in the beltway media reporting on who those folks are or why they did just this stadium prayer event with Rick Perry.


So the secular media is picking up that these self-appointed prophets and apostles are getting behind the presidential candidacy of Governor Rick Perry.  They have seemingly "chosen Rick Perry as their candidate, as their vehicle for their political goal, which is of course, world domination".  This is not just something to have "strong disagreement" with, but to accept that we indeed have "serious and fundamental theological differences" that include the Gospel itself.  As such, we have clear guidance from Scripture as to what to do in this type of situation:


Do not be unequally yoked with unbelievers. For what partnership has righteousness with lawlessness? Or what fellowship has light with darkness? 15 What accord has Christ with Belial? Or what portion does a believer share with an unbeliever? 16 What agreement has the temple of God with idols? For we are the temple of the living God; as God said,  “I will make my dwelling among them and walk among them, and I will be their God, and they shall be my people. 17 Therefore go out from their midst, and be separate from them, says the Lord, and touch no unclean thing; then I will welcome you, 18 and I will be a father to you, and you shall be sons and daughters to me, says the Lord Almighty.” (2 Corinthians 6:14-18)

We must separate ourselves from these false teachers, and continue to admonish, rebuke, and warn our brothers and sisters in Christ who are being caught up in the deception of ecumenical patriotism.

At this point, I do not see myself getting behind Rick Perry, even if he is a born again believer.  He is clearly deceived and lacks discernment, and if his candidacy has any role in the NAR, Joel's Army, the Manifests Sons of God, Latter Rain, etc., gaining a foothold stronghold, then I want nothing to do with it and will continue to sound the alarm against it.

Say No to Rick Perry's "The Response" Prayer Event

Do Not Be Deceived


Christians Putting the Flag Before the Cross? - Part 1

Christians Putting the Flag Before the Cross? - Part 2