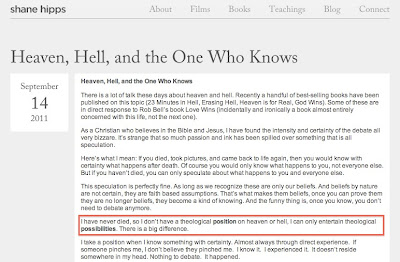 So a pastor of a church claims that he can't have an opinion on anything (and he specifically mentions heaven and hell) which he hasn't directly experienced.

This is without a doubt a very postmodern statement. And by postmodern, I mean a statement that advances the idea that truth cannot be known. The postmodern view is that different cultures at different times have had different truths which are true for them, but there is a general push back among postmoderns against the idea of subjective truth outside of us that is true for all cultures, at all times. Universal truths, if you will. Postmoderns believe that we can guess about truth, talk about truth, we can postulate, pontificate, and philosophize about what, in fact, truth is, but no-one can really claim to know for a fact what truth is.

This mindset is certainly the battlefield of our generation. But is this thinking biblical? No, in fact, this is not the biblical understanding of truth. To paraphrase Paul Washer, one of the great preachers of our day,  truth is not a what, but a Who:

For those who don't know why this should matter to them, it's because our youth have been relentlessly targeted by the Emergent Church Movement, a dangerous, heretical movement that is flowing unchecked into our churches, mostly through our youth groups. Christian parents: even if you have never heard of Rob Bell (or his co-pastor Shane Hipps), just ask your kids. Because I can almost guarantee you that even if they haven't read Bell's books or watched his NOOMA videos, their friends have. And why is this frightening? Because Rob Bell is a big, big, BIG leader in a new movement sweeping through our young people today called "Christian Universalism." Yes, you read that right, and yes, "Christian Universalism" is an oxymoron (like "jumbo shrimp" or "virtual reality").  But nonetheless, with leaders like Rob Bell and Shane Hipps leading the way, many of today's church-going youth have slowly been seduced into believing this false teaching, usually using Colossians 1:19-20 (out of context, of course) as their "proof-text."

As Todd Friel of Wretched Radio/TV recently pointed out on a great video clip, Rob Bell should have never become a problem, not if our pastors and leaders had been willing to do the hard thing, and step up and name names and call out false teachers before they - and their heresies - became full-blown.  But most of them didn't, sad to say, and the result of this has been that false teachers, like Bell and now Hipps, two postmodern hipsters who have always made it their goal to be culturally relevant and thus appeal to the youth, have captured an entire generation of young people with their damning heresies. Brothers and sisters, and especially, Christian parents: Let's please try to get ahead of this one so that we will be equipped and ready to answer back to their lies.

In closing, I will point out that leaders in the Emergent Church Movement were not as straightforward about their views when they first burst onto the Christian scene 20 years ago. And due to their relentless cultural relevance and clever marketing, they rapidly became extremely popular among churchgoing youth. But let me go on the record here in stating that the Emergent Church Movement have now been unmasked. In dribs and drabs, they have come clean about their theology. They are now on the record, and we know where they stand: they believe in Universal Reconciliation (a fancy way of saying they believe that all paths lead to God), and they are teaching this to our kids. I therefore urge all parents reading this post to make sure they are taking an active role in safeguarding their kids against Rob Bell's (and Shane Hipp's) false teaching. We must heed the exhortation from Scripture not to simply hand the instruction of our children over to others but to actively take responsibility, as parents, in biblically guiding, teaching and discipling our own children:


"These commandments that I give you today are to be upon your hearts. Impress them on your children. Talk about them when you sit at home and when you walk along the road, when you lie down and when you get up. Tie them as symbols on your hands and bind them on your foreheads. Write them on the doorframes of your houses and on your gates." (Deut 6:6-9)

How Important Is The Inerrancy of Scripture?


What Is The Emerging Church Movement and Why Is It Dangerous? (Phil Johnson)
"Love Wins" the Smoking Gun That Proves Rob Bell is a "Christian Universalist"

How Rob Bell's Theology Works In the Real World
Is Rob Bell A Universalist?  Yes and No.

Meeting at Mars Hill Bible Church Over Rob Bell's New Book
Jesus Gave Us Almost All We Know About The Doctrine of Hell
What Is A "Christian Universalist" (Besides an Oxymoron)?

What Is the "Wider Mercy" Doctrine?

Rob Bell and Shane Hipps: Blood on Their Hands