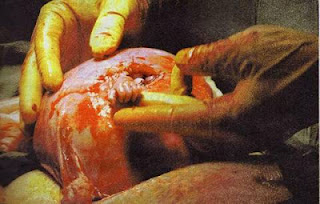 The picture above is of one of the most amazing moments ever documented. Little Samuel Armas was still in his mother's womb when it was discovered that he had spina bifida. His parents elected to have a rare surgical procedure done in which the baby was to be operated on while he was still in his mother's womb. Due to the rarity of this procedure, USA Today had freelance photographer Michael Clancy on hand to document this procedure. What transpired during the operation that is still being talked about 12 years later. According to photographer Michael Clancy:


"I could see the uterus shake violently and then this little fist came out of the surgical opening," Clancy recalls. "It came out under its own power. When Dr. Bruner lifted the little hand, I fired my camera and the tighter Samuel squeezed, the harder Dr. Bruner shook his hand."

Clancy, who was pro-abortion before documenting this moment, is now a motivational speaker at pro-life events.

Karma Just Doesn't Cut It
Posted by Christine Pack at 9:57 AM