We're Really Not Out To "Get" John Piper and Beth Moore 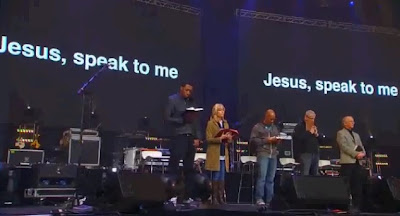 The Passion 2012 conference recently finished the Atlanta leg of its tour, with notable keynote speakers Dr. John Piper and Beth Moore among the lineup. A controversy erupted when it appeared that during one segment of the conference, the speakers on stage (including Dr. Piper and Beth Moore) were engaging in some kind of mystical experience, that had similarities to the Roman Catholic mystical practice of Lectio Divina. It was also simultaneously reported that John Piper's Desiring God website had published a post by writer Jonathan Parnell in which Christians were actually encouraged to incorporate the practice of Lectio Divina into their prayer lives. The blogosphere erupted with discussion about both of these things, including our own blog and Facebook page, with some commenters confused, some not surprised by this development, and also a large contingent of commenters I'll call the Matthew Seven One-ers ("Who are you to judge!") calling us out for, that's right, judging. 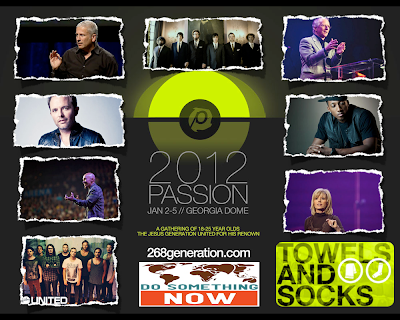 With all that in mind, my sister and I would like to answer to the charge that we're hatin' haters who just want to hate on people. So this post is written in an effort to show that neither one of us is out to "get" either Dr. Piper or Beth Moore.

Dr. Piper is highly respected in the evangelical community, and for good reason. He has written scores of very biblical books and articles, he is pastor of Bethlehem Baptist Church, and is known for being a staunch protector and defender of the purity of the gospel. This is why his apparent veering from the Reformation principle of Sola Scriptura (or, the idea that we hear from God through Scripture alone) by his participation in a seemingly mystical practice and his website's outright endorsement of Lectio Divina is all the more distressing.

My sister, who came out of the same New Age mysticism that I did, has written before about there being a time, when she was a very new Christian, that John Piper's teaching actually helped her get free of mysticism. In fact, she credits this particular video as being instrumental in helping her understand the biblical model for prayer:


At about the two minute mark in the above video, John Piper makes the following statement which is just a wonderful teaching on the biblical practice of prayer:


John Piper: "(You might ask me) why don't you just say that (prayer), then, is communicating with God? That would be a little less awkward than 'intentionally conveying a message.' Why don't you just say, prayer is communicating with God? And here's the reason I tried that and rejected it. It's because it sounds when you say that like you mean you're communicating that way (pointing up to heaven) and He's communicating this way (pointing down to himself), and that's prayer. And that's not prayer. The Bible never calls God's communication to us 'prayer.' Never. And we get ourselves into a big muddle when we concoct phrases to that effect. Like his talking to us is a kind of prayer. It isn't."


"One of the saddest things to me is that John Piper actually helped me come out of my Christian mysticism. When I began realizing that a lot of what is called Christian teaching these days is just pagan practices sprinkled with Christian terminology and some Bible verses, I looked to the Bible and to good Bible teachers to help me answer two basic questions: How does God communicate with us? And what is prayer? It was some teaching by John Piper specifically on that second question that really helped me. He was very clear: prayer is us talking to God- it is not like a telephone conversation where I talk and then God talks. I came to the realization that God speaks to us through scripture. I could stop looking for signs and clues and hunches and feelings- I could just read God's Word and know that God was speaking clearly and openly to me. It was so freeing."

And in fact, after Cathy made this comment on a recent blog post, in reflecting back I also remembered how she had labored over this issue with me when I was a new Christian and she was discipling me. She really worked to help me understand this strange new concept of how it is that God communicates with us. It was extremely freeing for me as well, having come out of mysticism, where you're always trying to figure out out if the sign/nudge/dream/vision/impression/etc. that you received was really from God. It was just, open up your Bible and read. Really? Really. So freeing. So unmystical. Not to mention, so biblical.


"Thank you God, that you are trustworthy. Thank you that you promise to make our paths straight. Please help us to acknowledge you in all our ways."

This is the prayer that my 10 year old son prayed this morning during Bible study, based on principles for praying that I taught him. I learned these principles for prayer from a Bible study by Beth Moore (Praying God's Word), one of the first Bible studies I ever took.  Before the class had begun, I remember being so curious about what was meant by the title of the book: how could one "pray God's word?" What did that mean? Now remember, I had come out of New Age Hinduism and paganism. There is no concept of a personal God in the New Age. In the New Age, there are lots and lots and lots of techniques from lots of different cultures that are used as a means to get to "God" - so there is some understanding of there being a "God" out there. But it's not a biblical understanding of God: that God is not only transcendent but He is also personal. God is a God who not only hears the prayers of his people, but He also has the power to answer them. He is a God who not only intimately and deeply cherishes his people, but He also disciplines them if need be, as a loving parent would discipline his children. These are just completely foreign concepts about God for New Agers. The New Age "God" is an impersonal essence, or energy, or vibration, and somehow, people find ways to tap into this God for the usual things (power, love, success); or, they access or experience this "God," through various mystical practices.

So with this as my background, I went into the Praying God's Word Bible study by Beth Moore, and I was just completely undone when I came to an understanding that the God of the universes would not only allow us, but want us to pray directly to him, to come boldly before the Throne of grace, and into his very presence. The class consisted of each member being given an acrylic holder that contained a large number of small index cards on which Scripture was written. We were taught to read the Scripture, dwell on the passage for a few minutes, and then pray the Scripture back to God. Seems pretty remedial doesn't it? But this was an entirely new concept to me, so much so that in the middle of one class, I was so overcome with joy about knowing, finally knowing really and truly, how to speak to God, that I began to cry. So for that study alone, I have tremendous goodwill toward Beth Moore. To this day, I pray using the principles for prayer as taught to me in that class, and have now taught these principles to my own children. And that is why I'm deeply, deeply grieved to have watched Beth Moore slowly become more and mystical in both her manner of speech and her teaching over time.

My question is this: Do 18-25 year olds living in our postmodern culture today really need to be encouraged to think of God in mystical, subjective and experiential terms (as the Passion 2012 Conference seemed to be teaching)? Is it wise to model to them that prayer is praying, then listening for God's words in response (as Dr. John Piper, Beth Moore, Francis Chan and Louie Giglio did in Session 5)? Is it biblical?

I would submit, in fact, that 18-25 year olds of today are already far too experiential and subjective in their worldview. They need to be re-trained to understand, as John Piper has taught so eloquently in the past, that biblical prayer is "intentionally conveying a message to God," not praying, and then listening for God's audible answer back to us.

May we all strive to be more biblical in how we approach God, remembering that He detests mystical practices, and continually seek to conform our prayer life as closely as possible to the biblical model for what that should be.

Testimony of a Former Mystic
Posted by Christine Pack at 1:46 PM