The Christian discernment blogosphere has already been very, very busy in just the first 4 weeks of 2012. First was Passion 2012 in Atlanta, GA, with its concerning alliances and seemingly mystical activities which led to obvious questions among many Christians. Next we had the whipped up Code Orange Revival which took place in Charlotte, NC under the direction of rising superstar pastor Steven Furtick, and at which Oneness heretic T.D. Jakes was......rebuked? corrected for his false teaching? asked to leave? No, none of those things. In fact, Trinity denier* Jakes was welcomed with open arms as a keynote speaker for the conference. In an even more surprising turn, well-regarded pastor and Gospel Coalition member James MacDonald spoke very warmly from the stage about T.D. Jakes, and in tweets after the event proclaimed his love for Jakes and his teaching. It was shortly after the Heresy Love Fest Code Orange Revival that James MacDonald, pastor of Harvest Bible Chapel, chose to resign from The Gospel Coalition, of which he had been a founding member.

The reason these events have been so controversial is because discernment writers, who are often charged with being hateful, judgmental, divisive, etc., have helped to put the spotlight on these concerning alliances (thus creating controversy), and have written numerous articles aimed at helping their fellow Christians understand why it's a problem that T.D. Jakes denies the orthodox understanding of the Trinity, that doctrine really does matter, and why Christians can't just willy-nilly link to anyone who comes down the pike claiming to be a Christian brother. Words matter. Terms matter. Definitions matter. After all, we demand precision from cab drivers, surgeons, airline pilots, and elevators: should we ask any less from those who are handling God's word? And thus, controversy has arisen. Should high profile pastors like James MacDonald (and by default, well-regarded groups like The Gospel Coalition) be associated with someone like T.D. Jakes, a character that my grandfather would have given the old-fashioned term "huckster"?  So a number of Christian apologetics and discernment bloggers, including:

Erin Benziger (Do Not Be Surprised)

(among others) have been outspoken critics of events like Code Orange Revival and The Elephant Room II, and have labored to help their fellow Christians understand the doctrinal problems with some of the speakers at these events, including Steven Furtick and T.D. Jakes. 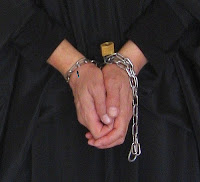 In an ongoing effort to gather information, talk show host Chris Rosebrough and writer Erin Benziger (as mentioned above) both purchased tickets to Elephant Room II and traveled to the event, which began today. Upon entering the event, however, both were approached by security and told that their registration at the Elephant Room II conference has been revoked. Both Rosebrough and Benziger were told to leave the premises of Harvest Bible Chapel under threat of arrest. Yes, you might want to read that again, and no, it's no joke. (And you can listen to Chris Rosebrough discuss what happened in a radio interview at Issues, Etc. here)

And now read the purpose statement of The Elephant Room:


The Elephant Room is more than an event. It is the outgrowth of an idea. The idea that the best way forward for the followers of Jesus lies not in crouching behind walls of disagreement but in conversation among all kinds of leaders about what the scriptures actually teach. We must insist on the biblical Gospel, right doctrine and practice but not isolate ourselves from relationship even with those who believe much differently. (our emphasis)

As you probably already know, James MacDonald is the pastor at Harvest Bible Church and also the host of The Elephant Room II. Just yesterday, MacDonald resigned from The Gospel Coalition due to his invitation to T.D. Jakes to speak at this year's Elephant Room.

Wow- apparently, MacDonald will separate from an organization that is grouped around the Biblical Gospel (The Gospel Coalition) for the sake of giving cover to a heretic who preaches a different gospel, while at the same time refusing to even admit into attendance some Christians who disagree with MacDonald's yoking to said heretic.

Who is it in this picture that is "crouching behind walls of disagreement?"

* Before the emails start, yes, I know that T.D. Jakes was asked whether he affirms the Trinity at the just begun Elephant Room II, and yes I know that he answered that he does. The problem here is that no-one has asked him to define his terms. Those who have researched T.D. Jakes and know him well can attest that he does not hold to the orthodox view of the Trinity as held by Christians through the centuries.

The Doctrine of the Trinity

Running Scared: Why Is The Elephant Room Afraid of Scrutiny

Even Better Than The Race Card

Why Is Oneness Pentecostalism Heresy?

T.D. Jakes' Modalism is Just the Tip of the Iceberg

Is Nicene Christianity That Important? An historical-ecumenical note
Posted by Cathy at 11:42 AM